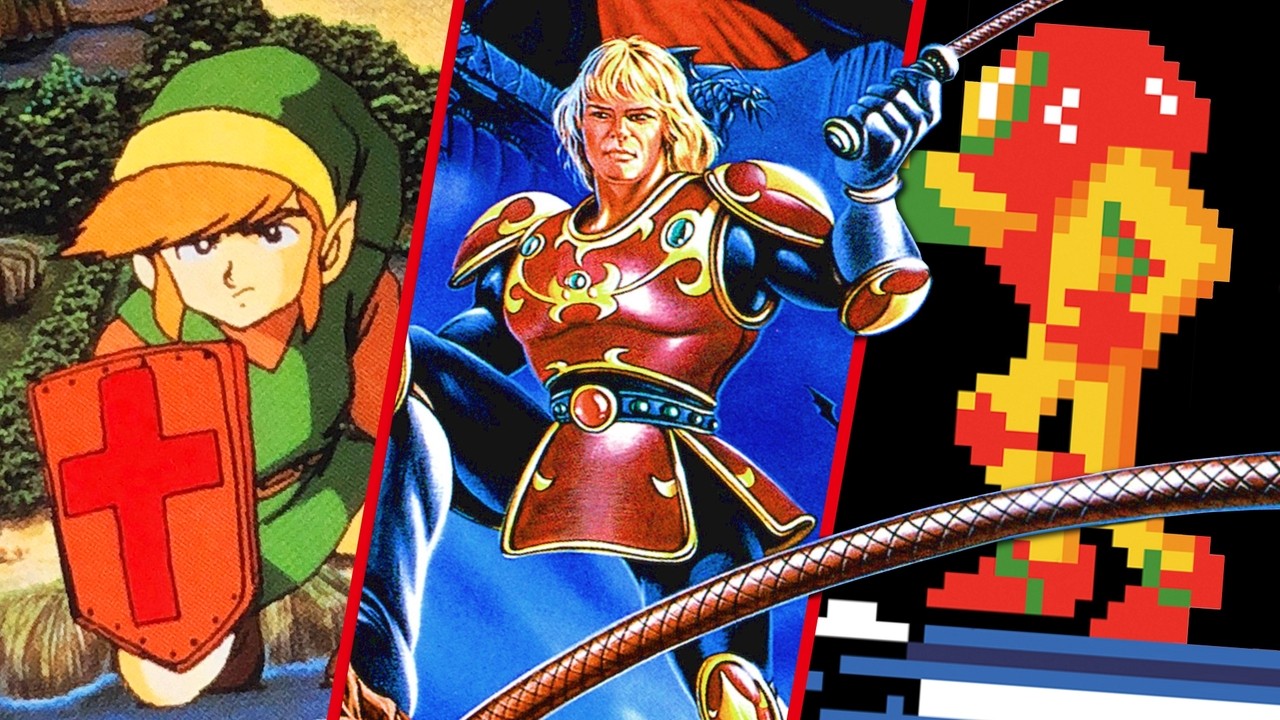 The Famicom Disk System (or the Family Computer Disk System to give its full title) released in Japan — and Japan only — on 21st February 1986. This Famicom add-on came with a wave of new games on bespoke Nintendo-branded floppy discs which had several advantages over cartridges at the time, plus one or two drawbacks. Load times from discs were an issue (then as now), and you’re far more likely to come across a non-functioning FDS disc these days than you are a Famicom cartridge.

However, durability aside, the Famicom Disk System offered cheap memory for developers to use and expanded the functionality of the base console. An extra audio channel enabled games with a richer soundscape and thanks to the its innate ability to write data to discs, it was possible to save your game and return to it later — a feature that wouldn’t become common on cartridges until later thanks to the extra cost of battery-powered save memory (password systems were often used as an inelegant compromise on carts).

The Famicom Disk System had exclusives, of course — games like Yume Kōjō: Doki Doki Panic (which would famously be adapted to become Super Mario Bros. 2 in the West), Otocky and The Mysterious Murasame Castle are particular highlights — although the majority of its biggest games would be adapted to the cartridge format before long. In honour of its 35th anniversary (which it shares with a certain game at the bottom of this list), we’ve picked out eight games which came to the NES in the West that we think were probably better on FDS.

When it comes to NES games, there’s a lot of nostalgia involved and we love the western versions of nearly all of the games below to death. Still, we still think that Japanese gamers got the slightly better versions of these classics. Let us know your thoughts in the usual place.

Fair warning — there’s lots of discussion about musical variations, extra wavetable synth channels and save systems versus passwords to come…

‘Better’ is a subjective term, of course. As a disc-based system (sorry, disk-based system), the FDS release of Castlevania has load times not present on the cartridge version. However, on balance we’d take the original Akumajou Dracula (the game also came out on Famicom cartridge in 1993) over the western one thanks to the convenience of saving your progress.

The ability to save comes with three save slots, each of which you assign a name when starting in typical fashion. The name you use in the FDS version is added to the credits at the end of the game, which is a neat touch. For example:

AND THE HERO
SIMON BELMONDO

It’s not a game-changer, but it’s these little things which arguably make the FDS version the pick of the bunch.

You’ll find several games in this selection are included purely for the fact that the FDS version supported saves. Perhaps you couldn’t wait to slip your ‘Password Pak’ in the slot and input lengthy alphanumerics to pick up where you left off, but we always found it interminable. Metroid on Famicom Disk System might have lacked the ability to play as Samus sans her armour (if you could beat the game in under three hours), but we’ll happily forgo seeing the bounty hunter blasting space pirates in a pink leotard if it means not having to copy down multiple 24-digit passwords.

Interestingly, The Cutting Room Floor speculates that Nintendo may have intended to use battery back-up to enable on-cart saves, as opposed to the laborious password system used in the final release.

As we’ll hear more about below, the extra wavetable synth channel available on the FDS gave the disk version a richer palette to work with; the absence of the extra onboard sound chip meant audio that used it had to be reworked for the West. The comparison video below highlights how the atmospheric main theme benefitted from the extra sound channel, and the appearance of Samus (1:00) switches from an organ-like hum to a juddering warble on NES. However, the difference on other tracks is less pronounced — Brinstar, for example (scrub to 1:14 and then to 2:00 to hear the difference on that classic).

Also, note how the title screen in the FDS version has a cool blue ‘3D’ logo, not a boring old flat one. Better? Indubitably.

Hardly a glittering jewel in the Nintendo firmament, Wrecking Crew began life on a standard Famicom cartridge in 1985 before making its way to the Disk System in 1989.

Why dig this particular game out of the rubble for a Disk System encore, you ask? Well, the original game features a level editor which required the use of a Japan-only peripheral — the Famicom Data Recorder — if you wanted to save your creations to an old-school cassette tape (also used to save custom Excitebike and Mach Rider tracks). The FDS version let you do this without the need for the tape deck peripheral and gave Wrecking Crew its very best chance to shine.

Known as The Legend of Zelda 2: Link no Bouken in Japan, the list of minor differences between Zelda II: The Adventure of Link and the 1987 FDS original is a long one; we thoroughly recommend checking out The Cutting Room Floor’s comprehensive round-up of regional differences.

However, for us the fact that the Famicom Disk System version had animated water on the overworld map is pretty significant. The top down sections of the game — admittedly zoomed-out compared to the view from the original Zelda — always struck us as lifeless and rudimentary. The movement of the water, while hardly a revolution, helps add a little life to the otherwise static scenery, and it’s amazing the impact that one effect has.

Then there are the musical differences. Here’s a comparison of the title screens — make your own judgements… Hip Tanaka’s brilliant soundtrack also gets the now-customary downgrade/alterations in the West, but other territories also lost out on microphone functionality built into the Famicom’s second controller. Originally, you could use this microphone while pressing the ‘A’ button to ‘haggle’ with shopkeepers, presumably shouting their ludicrous prices down to something reasonable. Of course, there was no voice-recognition going on here — the mic simply detected loud noises and other audio input and registered it accordingly.

We’ll look at another Famicom Disk System title which famously used the microphone later. It might not be a huge addition, but it’s a fun addition to an intriguing, if flawed, entry in Nintendo’s 8-bit catalogue.

While its reputation for inscrutability and wilful confusion is well-deserved, we’ve got a soft spot for Castlevania II: Simon’s Quest. Perhaps it’s the killer soundtrack or the fearlessness of the developers in trying new things, but despite its deceptive villagers who provide obtuse (and often downright misleading) information and its near-total lack of handholding which results in an utterly impenetrable experience unless you use a guide, it’s got so much of the series’ spirit and we can’t help but admire it.

The Famicom Disk System features saves (as opposed to a functional, if inelegant, password system — yes, it was better than nothing but entering passwords ain’t our idea of fun). Perhaps the most notable difference is the reworked soundtrack of the western release. Reworked music would be an element of Castlevania III, too, due to the NES not supporting the external VRC6 chip used in the Akumajo Densetsu Famicom cart which added three additional sound channels to play with in the sequel.

We’re so familiar with the western version that it’s tough to judge if the FDS version is ‘better’, but check out the comparison of Bloody Tears below to hear the added richness of the original soundtrack. For example, the original intro is clearly emulating the ringing of bells which the NES version doesn’t convey at all. They’re both rollicking good soundtracks, but the original FDS soundtrack boasts more variety, subtlety and texture.

This is technically a different, enhanced FDS-exclusive ‘sequel’ to the original Excitebike with added two-player functionality and extra courses, but we’ll bend the rules with this one just to talk about Vs. Excitebike for a bit. The fact that you could actually use the level editor and save your creations in the FDS version makes it the obvious choice if you’re enjoying an 8-bit Excitebike on original hardware.

As we mentioned earlier, the original Famicom Excitebike used the Famicom Data Recorder to save tracks in Japan. That functionality was retained in the NES version with the expectation that a similar peripheral may be released at a later date, although one never materialised. Subsequent Virtual Console re-releases enabled options to save tracks, of course — 3D Classics: Excitebike, for instance — and this Vs. update features totally different music to the original, too. Still, if you’re not attached to the original audio, this FDS version offers the full Excitebikin’ Monty.

The game which shares its birthday with its original host system, the original Famicom Disk System version of Zelda no Densetsu: The Hyrule Fantasy (as The Legend of Zelda is known at home) might feature some questionable ‘Engrish’ and lack some of the subtle refinements that would manifest over the years in multiple re-releases, but it’s arguably still the best way to experience the game as it was designed to be played.

Thankfully, Nintendo did splash out for battery-powered save functionality for the NES cart in the West, banishing passwords to the darkness where they belong. However, the soundtrack and audio effects are noticeably richer in the original, which makes a huge difference when you’re on an epic quest that is all about atmosphere and adventure — see below for a handy comparison courtesy of Legends of Localization‘s Clyde Mandelin.

The Famicom’s microphone embedded in Player 2’s controller was also famously used to defeat the appropriately named Pols Voice, a sound-sensitive rat-mole creature that roam the dungeons and could be destroyed most efficiently by shouting into the mic. It wasn’t until Phantom Hourglass that Zelda fans in the West were able to give these enemies a sound thrashing with an aural blast into their DS microphones.

A big thanks to The Cutting Room Floor, which proved invaluable when researching the differences between the versions of the games above. If you’re interested in seeing some of these Famicom Disk System games in action, we recommend checking out Jeremy Parish’s 30th anniversary look at the system.

Have you played the FDS versions of any of the games above? Let us know below.