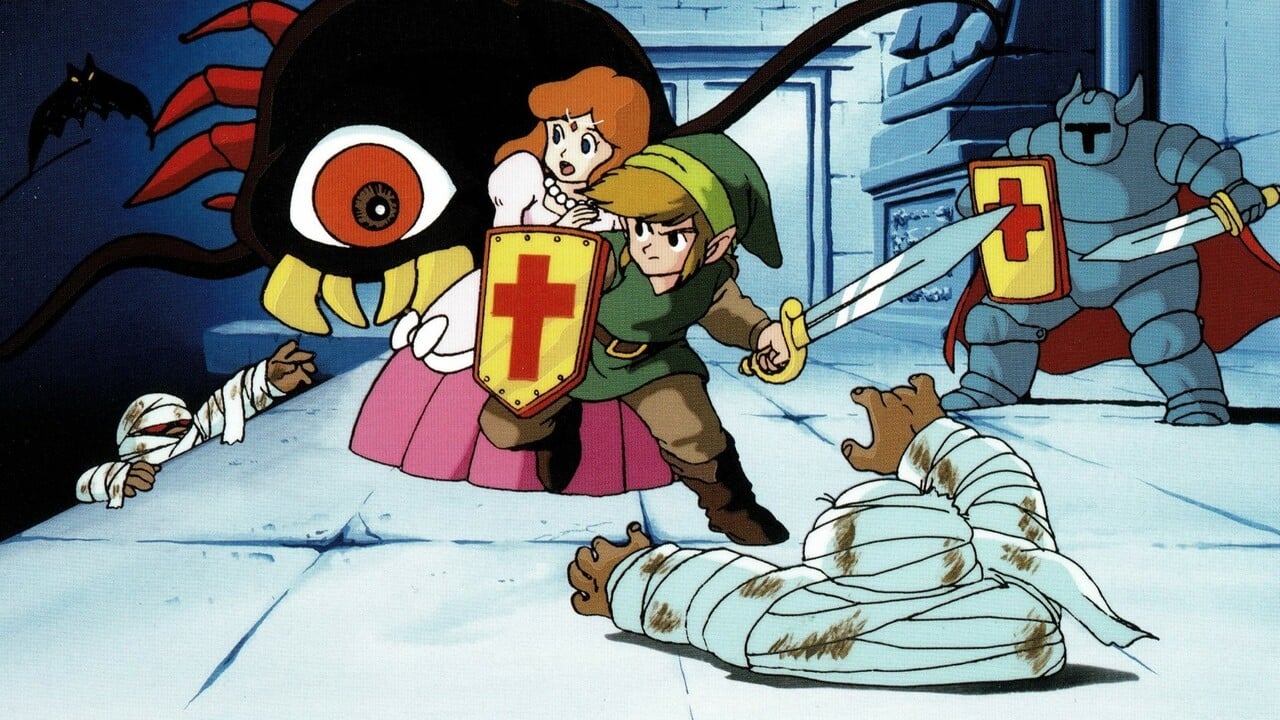 To celebrate the 35th anniversary of The Legend of Zelda, we’re running a series of features looking at a specific aspect — a theme, character, mechanic, location, memory or something else entirely — from each of the mainline Zelda games. Today, Alan looks back at the game which laid the groundwork not just for the series, but a whole new style of video game thirty-five years ago today…

Here’s some free advice: don’t ever get caught in the mired mixed-medium comparison game.

You know, it’s whenever someone says “X is the X of X”. (Dark Souls to the front of line, please.) There may be a morsel of insight to mine from equating one unrelated milestone to another, but considering the burden of context every art piece, every packaged-together idea carries with it, usually you only end up with a metaphor collapsed in on itself. Yet, here I go. Am I looking forward to the literary essay rebuttal to this piece? No, I am not.

Robinson Crusoe, yes, the 300-year-old text by Daniel Defoe, is a rollicking story of an adventuresome Englishman. It’s about a dude wrecking ships all over the ocean while looking down the barrel of misadventure, then getting stranded for decades on some remote island fraught with whatever monsters, people, and inhumanities the English mind could conjure at the time. As Crusoe was written as a first person account mimicking the tone of a letter or a diary, it stretched the minds of the Western hemisphere reader, confusing 18th century literaries into actually believing it was a true story. In doing so, the book blazed forth a new sub-genre: “realism in fiction”. As follows in the high school texts, it inspired endless imitation, was republished untold times, and is routinely cited and debated to pretty much be the first English novel. 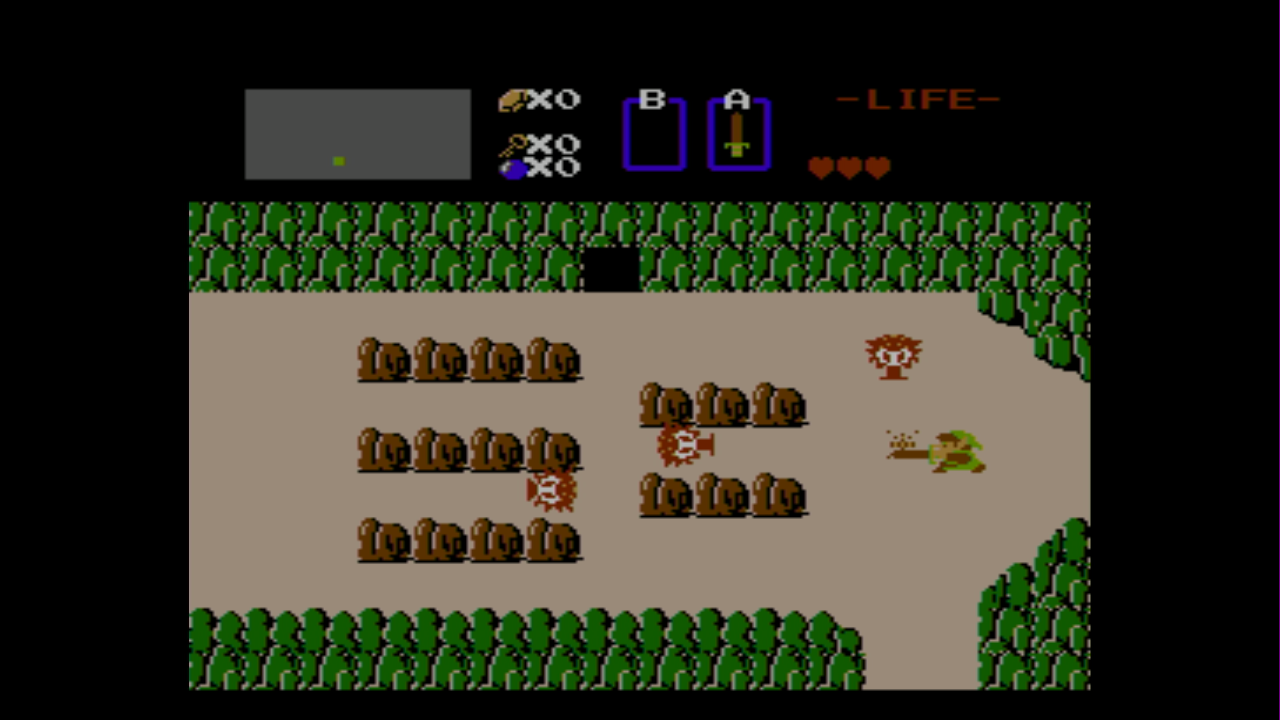 Here’s the first problem with this comparison: the original Legend of Zelda stars nobody. Well, it technically stars a green sprite with little to nothing in the way of exposition, other than, apparently, it’s dangerous to go alone. The whole story fits on one page.

Meanwhile, the titular Crusoe has a whole book of elaborated motivation (never mind the book’s frothing imperialist overtones and xenophobic strokes). And anyway, Zelda was written with more of a medieval backdrop, and it’s always had kind of a Tolkien vibe.

But before we move away from this tortured analogy, here’s the point: while Crusoe may have been a character inhabited, by critically shifting the literary perspective to the first person, then combining that with a story-driven narrative just believable enough, it allowed readers to hop into Crusoe’s shoes, you might say much the same way players pick up a sword in Zelda. Without much of anything providing conflict between Crusoe’s thoughts and his actions, when you’re reading that book, you may as well be sailing those waters yourself.

265-odd years after that seismic shift, The Legend of Zelda for the NES, more than anything else of that time, stands tall as the inherent promise of video games delivered; it puts you in the vantage point of somebody else with the explicit means of gaining a new experience, but then you get to control them. The original game arguably pulled this off more effectively than any single game before itself, and remarkably, still is quite potent in 2021. Really, it is.

Zelda as a verb 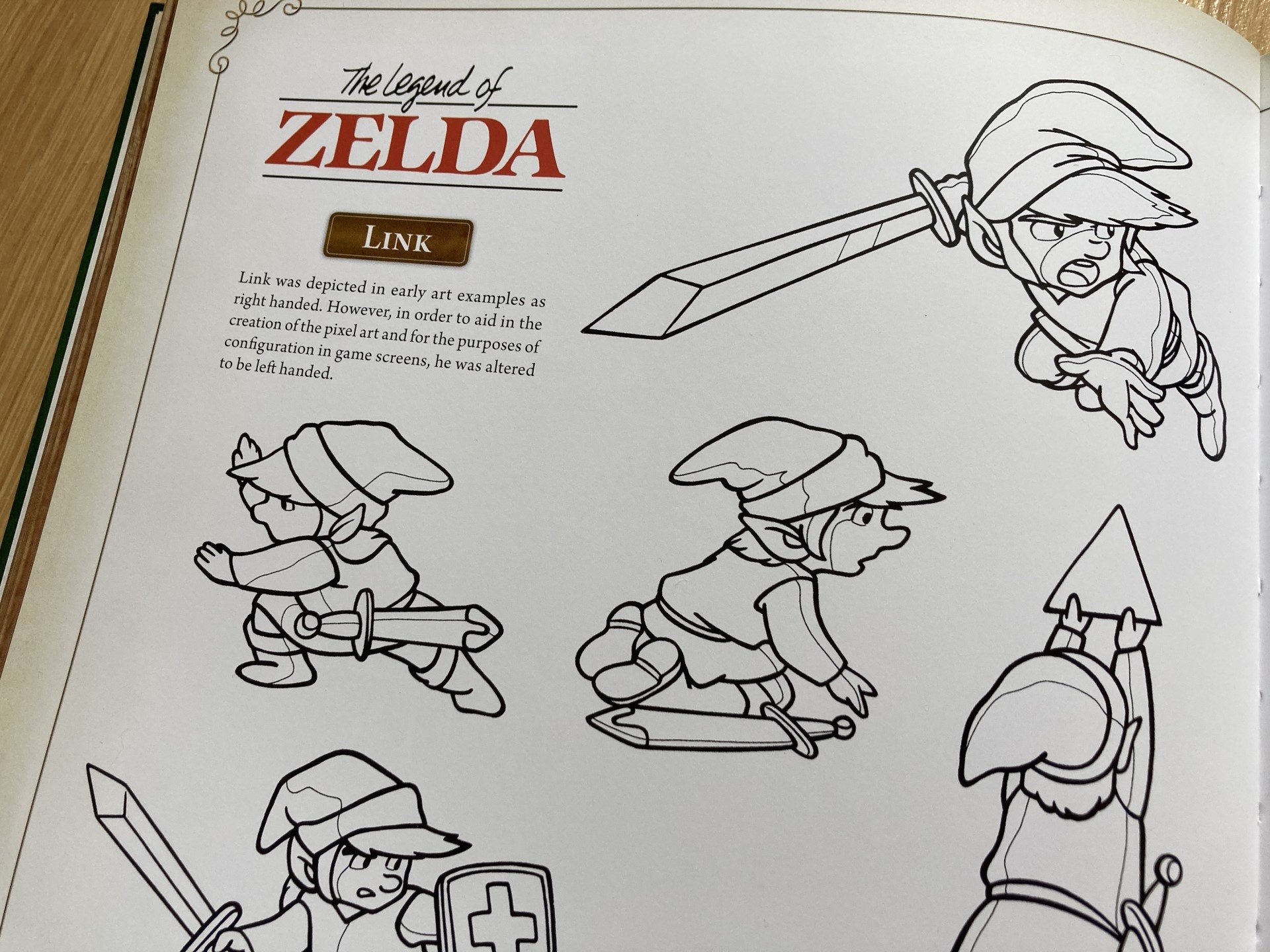 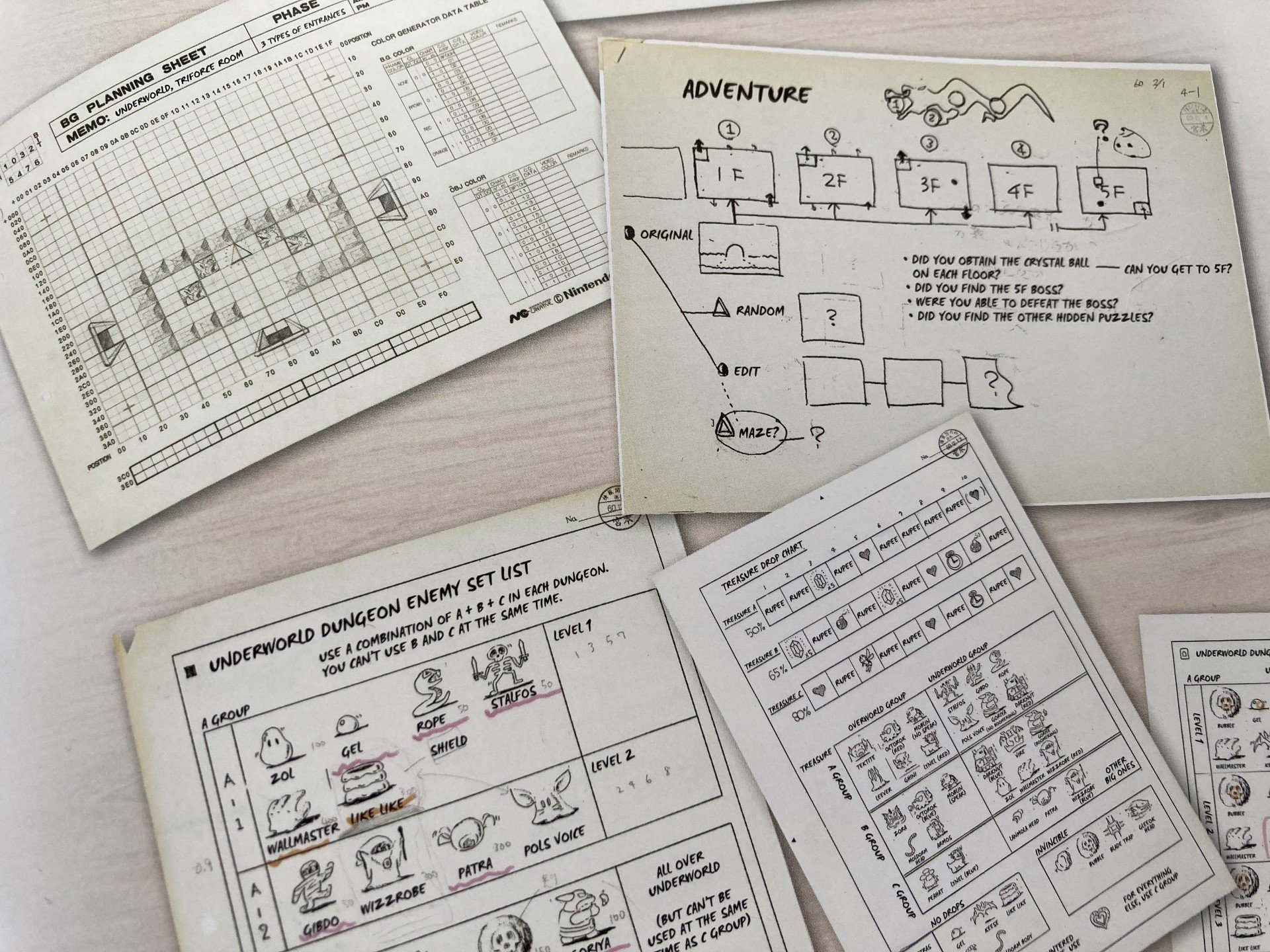 The Legend of Zelda, lest we forget, is a top-down action-adventure game. It’s a puzzle box disguised as a walking simulator (with a sword). It has goals, but they are prescriptive only to the curious. Have you played it recently? What are you even supposed to do when it starts? In 2021, you use context clues derived from your video-game-brain to seek out any kind of destination, and a means to get there. In 1986, it wasn’t much different, except you really didn’t have any prior experience to base your inputs on. The first Legend of Zelda game was a trip in more ways than one.

Back then, if you were playing a video game (often for the first time ever, as the video game boom of the mid ‘80s often allowed for), the immersion felt crazy. And in Zelda? You may as well have been wearing VR goggles, to the extent that here was software where you were not just singularly shooting or running or chomping or hopping, but you were sailing the seas, rummaging through a graveyard, getting lost in a neverending wooded area, and so much more—or not, if you didn’t. And it looked and sounded great! Even if you were a rare video game connoisseur at that time, this adventure controlled at light speed compared to stuff like the mouse and keyboard-driven King’s Quest, let alone the text adventure games that came before that. Like every final creature lurking inside Zelda’s nine hidden dungeons, Zelda was a different beast.

But the original Legend of Zelda should not be immortalized only on the strength of its immersion for its time, but it will and should be remembered for something even more remarkable, and even more quintessential to the entire medium’s true arrival: Zelda, both as a game and as a concept, teaches people to feel and think something due to their own actions, not just the game’s.

The Zelda formula coined the essence of discovery so well, its digitized noises are now universally short-hand for “I figured it out”. Da-da-da-daaaa!

This seems somewhat unremarkable said out loud, but think about it. No other medium is burdened with so many things as are video games. Up until Zelda and its cohorts, video games were more or less an application of the tech of the moment. Tech advancement mostly resulted in games that were faster, brighter, richer. Games loved to present you something, then in A to B fashion, you conquered that thing. You don’t really feel as though you are in Pac-Man’s maze. You are never really on Q-Bert’s tower. You see these strange things, then you rotely deal with them.

But with Zelda, no, no, no, you are not in another templated dungeon crawler or even a turn-based number assault. Press start and you are on a gosh-darn, real adventure! The game presents something to you, the blank character, and much more like in real life, you engage with it, or you walk away. Like in real life, there are chapters to your adventure, but they only turn if you figure out where to turn them. You don’t need a high score, but once again, like in real life, what you need are more practical skills—in this world, it’s learning which solid objects to push, or when to bomb random curiosities on the map (provided you even found a map in the first place…or a bomb). The Zelda formula coined the essence of discovery so well, its digitized noises are now universally short-hand for “I figured it out”. Da-da-da-daaaa!

That’s a shift in thinking, from purely interacting, to relating. And that was vital not just for Zelda, but for the entire medium.

That’s a shift in thinking, from purely interacting, to relating. And that was vital not just for Zelda, but for the entire medium.

It’s somewhat subtle, but it’s what separates video games from everything else. Why? We take this for granted now, but a digital interaction can make us anyone, or let us do anything; relatability is as crucial for what is effectively an empathy machine as sight and sound are. Games have always allowed you to make certain choices, then see the result of them. Here, finally, “realistic fiction”, told at your pace, starring you. Real life, but better.

The Legend of Zelda will always be the best Zelda 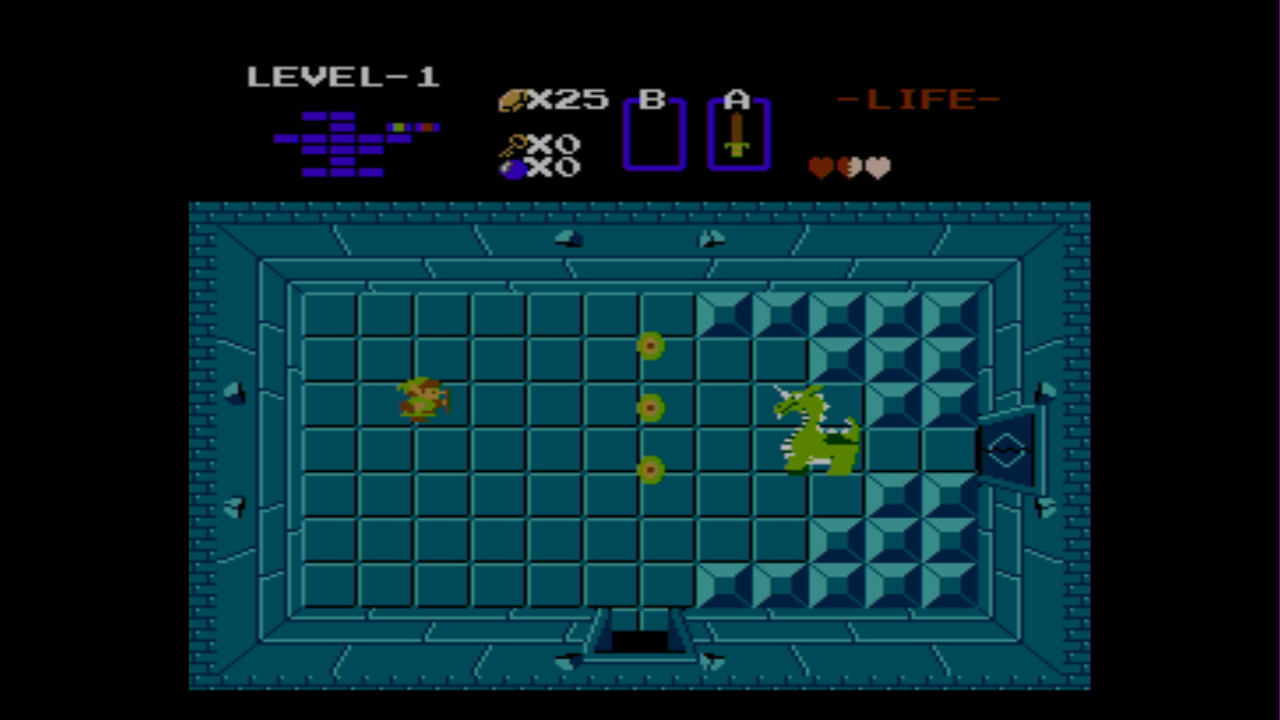 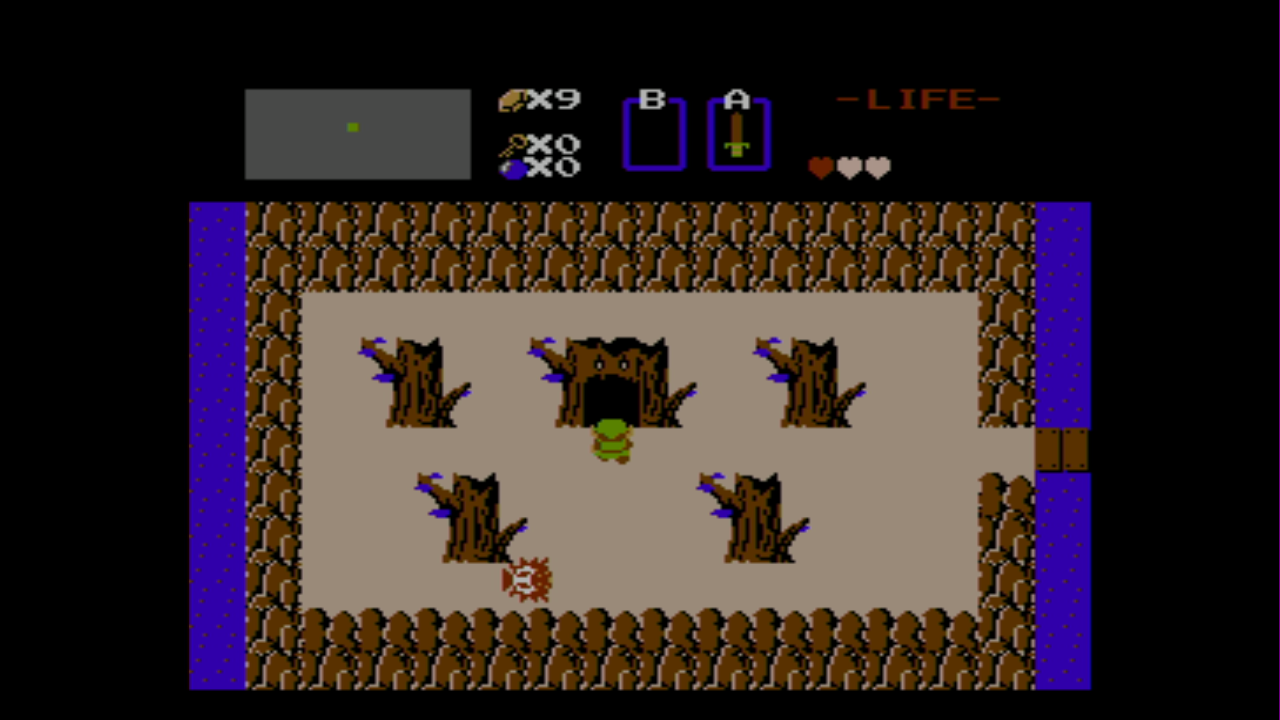 Every single Zelda game is inside the original Legend of Zelda. No, you cannot fly on a bird in the original game, or ride on a boat that’s shaped like a dragon, or even milk a cow. There isn’t much in the way of lore, there are no real cutscenes, and there is no fully orchestrated soundtrack.

But the thread that makes any Zelda, well, Zelda, is 100% present in the very first game. You can still play it right now and you will feel it. Largely due to its incredible sequels, the first one is criminally underrated.

Though subsequent Zelda games over the next thirty five years shifted further and further into character development and world building, among other modern conventions, the best Zelda games remain the ones where what they communicate to the player is totally unspoken. It’s no wonder The Legend of Zelda’s immediate sequel, 1987’s Zelda II: The Adventure of Link, remains branded as the black sheep of the entire series; it’s a sidescrolling action game, an altogether different experience guided by a different philosophy in interaction, one which was never returned to again.

Largely due to its incredible sequels, the first one is criminally underrated.

Today, Breath of the Wild, the latest mainline entry in the series (until its yet to be released numerical sequel, anyway), is often touted as a total reinvention of the Zelda formula. But in fact, it is nothing less than an un-perversion. Rather than start the player off with a bombastic cutscene laced with a grand decree set forth by evil actors — you know, basic video game stuff — BOTW begins with hardly a memorandum at all, setting the player off into its vast, deep universe with all the force of a gentle tap and a pretty sunset. You learn and communicate with the game as you decide, and it always returns the favor. That is Zelda. (Unsurprisingly, yet still fascinatingly, BOTW was developed in blueprint using the original title’s 1980s visuals, helping the developers to maintain that Zelda nexus, no matter how ambitious the game got.)

Starting today, we’re taking a step back to look over all thirty-five years of Zelda fun. From back here, you might say The Legend of Zelda is the Robinson Crusoe of its time. It expanded on what came before, delivered on the medium’s potential, and has been iterated on over and over again. But with this medium, its blank characters have an even more practical application.

Just as the shining, yellow triforce is Link’s lodestar, Link — as his name has always implied — is our way out of here.