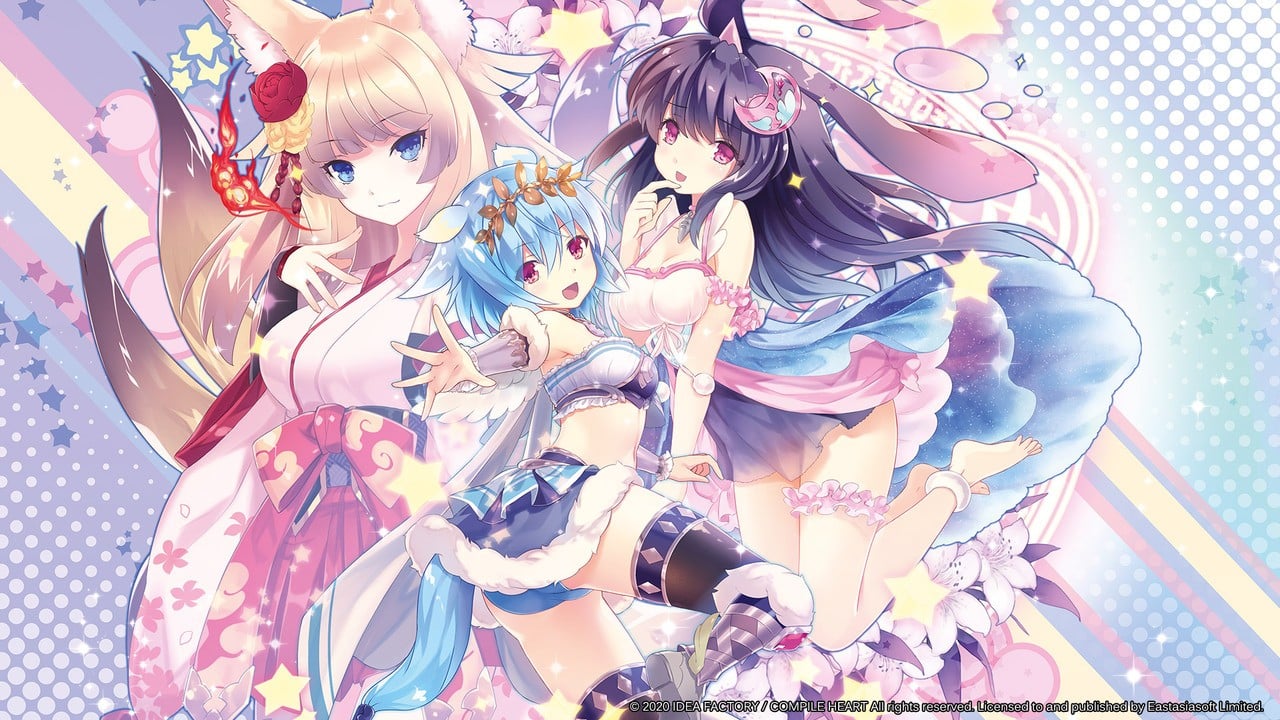 Fair warning to those who need it: Moero Crystal H is a game that not only embraces sexuality, it positively revels in it. It is a game that knows and acknowledges that sexuality is fun, ridiculous, silly, and something that we should feel comfortable laughing about. And it is a game in which your party members consist of monster girls who grow considerably more powerful when adventuring in nothing but their lingerie, and in which the vast majority of enemies are thinly-veiled references to genitalia, secondary sexual characteristics and/or bodily fluids. If any of that sounds like something you’re not into, Moero Crystal H probably isn’t a game for you. If you are at the very least curious, however, read on – because this is also an absolutely cracking dungeon crawler with a wonderful (and enormous) cast of playable characters.

In Moero Crystal H, you take on the role of Zenox, a young man who has come to the city of Arthenon in search of his missing father. While wandering around the city, he happens to witness a terrible crime: the theft of the ‘Dark Bra’, a mystical artefact that keeps the world in balance and harmony so long as it is kept together with its counterpart, the ‘Light Panties’. Teaming up with Pegasus girl shrine guard Luanna, who feels a sense of personal responsibility for failing to prevent this potentially world-shattering event from taking place, Zenox sets off on a journey to track down the thief and save the world before ‘The Judge’ is born from a dimensional rift and causes all manner of mischief. 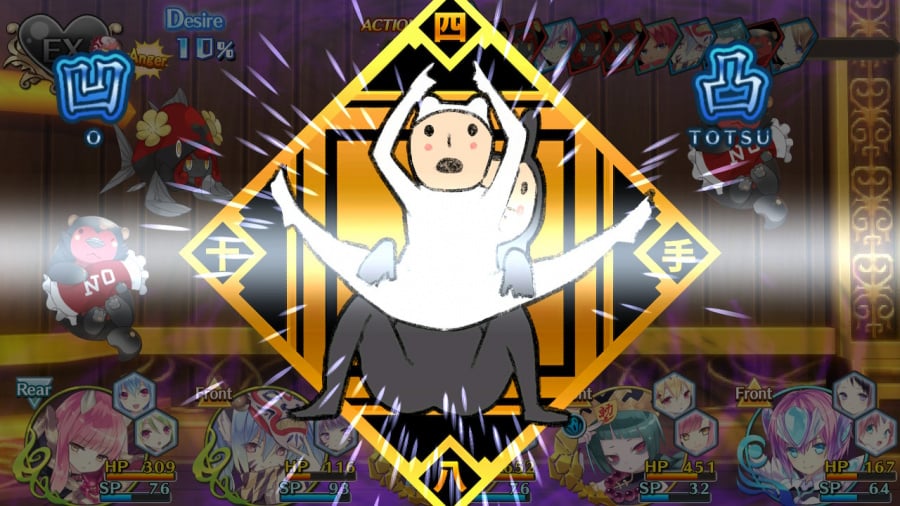 The narrative setup is absolutely ridiculous on paper, of course, but as with many games like this, the game’s cast plays things admirably straight, which just makes it more entertaining. When coupled with the strong characterisation, witty writing, excellent Japanese language voice acting and solid localisation from eastasiasoft, it’s hard not to find oneself feeling surprisingly invested in this absurd quest and the fun, colourful setting in which it unfolds.

At its most basic level, Moero Crystal H unfolds as a grid-based dungeon crawler in which you assemble a party of monster girls drawn from various mythologies, explore a series of dungeons, fight off hordes of enemies and gather treasure. Your eventual goal in each of the game’s main dungeons is to take down the ‘Area Leader’, a monster girl who has been corrupted by the influence of the Dark Bra, and return peace to the region. 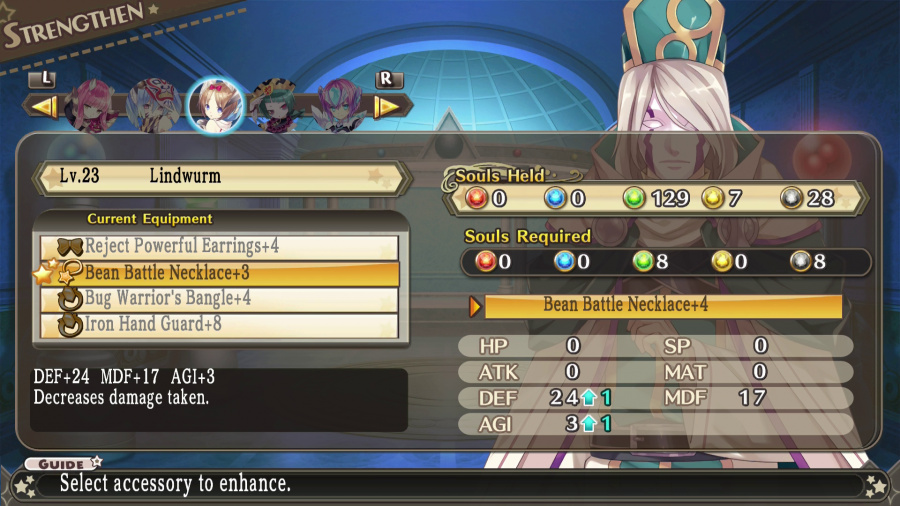 Zenox’s role in combat is either to make use of items to support the party, or to manipulate his ‘Desire’ energy in various ways. Each turn, he can store energy, release it to a girl to temporarily power her up, or make use of it to manipulate the turn order. There’s an element of risk versus reward here, though; while storing energy for several turns can result in a monstrous (no pun intended) buff to a party member’s stats that is ideal for difficult fights, each consecutive turn of storing energy carries the risk of Zenox’s ‘passion exploding’, followed by him needing to spend several turns in ‘calm time’ before he can act again. Gentlemen in the audience can all relate, we’re sure.

While the dungeon crawling is solid, enjoyable, slick and speedy, where Moero Crystal H arguably gets most interesting is between expeditions. Upon returning to town, you can visit any of your recruited monster girls in their inn rooms to chat with them, give them gifts or play the ‘Loving Scratch’ minigame to build up their affection. As their affection rises, they’ll unlock a second ‘Moe Trait’ besides the one they start with; these are passive skills that can benefit the whole party. You’ll also have the opportunity to get to know them a bit better through various scenes – these include date sequences between the girls and Zenox, and also scenes where various pairs of monster girls interact with one another. 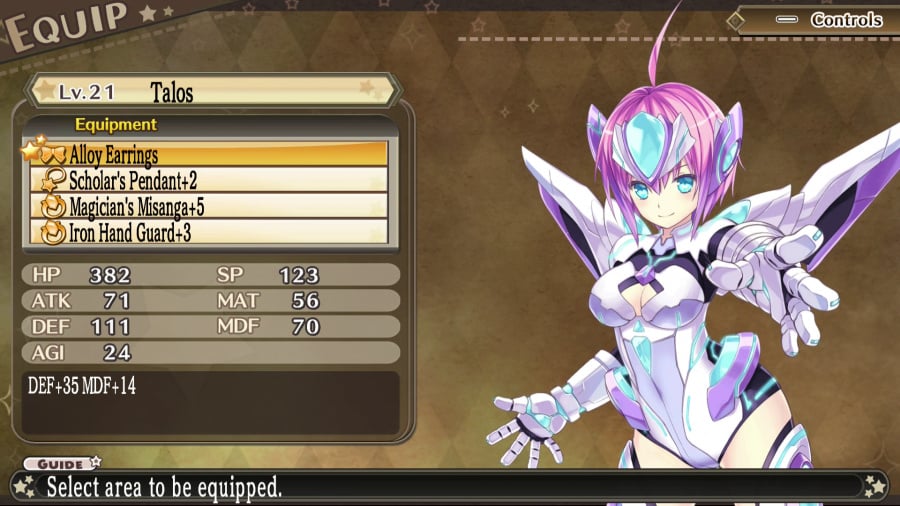 Given that there are 80 recruitable monster girls in the game – some of whom arrive as part of the story, but most of whom must be found in the dungeons and defeated in battle – the sheer number of these possible scenes is astounding, and they help add a ton of personality to a subgenre of role-playing game that can sometimes feel a bit thin on characterisation and storytelling. Here, your party members are much more than just collections of stats and skills; they’re people that you really get to know over the course of your adventure, even if they’re not necessarily important to the main plot of the game.

It doesn’t end there, either. Each girl has three dungeons inside the deep reaches of her heart and soul, each of which can be unlocked through a shoot ‘em up minigame. Clearing each of these dungeons allows you to build her affection up to its highest level, unlock a unique character-specific skill or open up the ability to equip stat-adjusting panties and skill-learning bras separately from one another instead of as a set. When coupled with the game’s incredibly robust equipment system, which lets you upgrade accessories stat bonuses using spiritual energy gathered through combat and add additional effects to them through releasing the various girls’ ‘seals’, you’ll find you can customise each and every one of those 80 playable characters to an impressive degree, giving you the opportunity to assemble parties that are ready for any of the game’s challenges.

Moero Crystal H is an outstanding dungeon crawler that combines the light-hearted, sexy, character-centric comedy of harem anime with deep combat and progression mechanics, plus a healthy dose of dating sim for good measure. It respects the player’s time with quality-of-life features such as adjustable speed controls for both combat and exploration as well as a helpful autopilot mode – though it would have been nice to also see an option to save and recall party lineups and load-outs. It’s beautifully presented, too, with delightful animated Live2D characters, gorgeous (if infrequent) event images and incredibly catchy music. Most importantly, though, it plays well – and provides enough content in both its main story and endgame to keep even the most avid RPG fan busy for hundreds of hours.